A Pivot to Pause?

Signs of peaking inflation and the potential for central bank moderation in 2023 pushed equity marks higher in November. 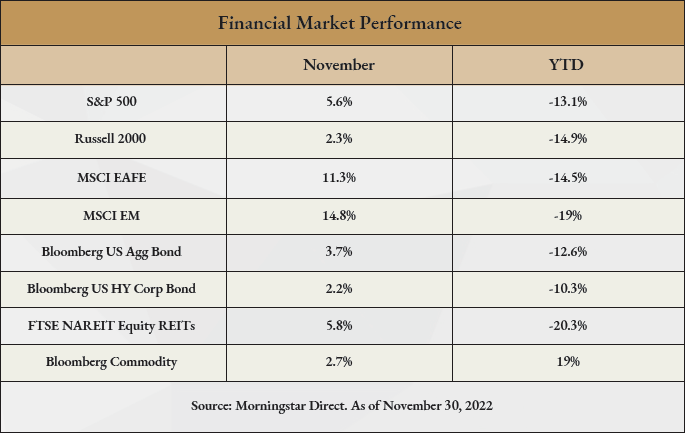 This report was prepared by Fiducient Advisors, a third-party vendor, and is intended for the exclusive use of clients or prospective clients of Visionary Wealth Advisors. The information contained herein is intended for the recipient, is confidential and may not be disseminated or distributed to any other person without prior approval of Visionary Wealth Advisors. Any dissemination or distribution is strictly prohibited. Information has been obtained from a variety of sources believed to be reliable though not independently verified. Any forecasts represent future expectations and actual returns, volatilities and correlations will differ from forecasts. This report does not represent a specific investment recommendation; and no portion of this communication should be construed as a solicitation to buy or sell any specific security or investment product or to engage in any particular investment strategy. Please consult with your advisor, attorney and accountant, as appropriate, regarding specific advice. Past performance does not indicate future performance and there is a possibility of a loss. Visionary Wealth Advisors is an SEC registered investment adviser that maintains a principal place of business in the State of Missouri. The Firm may only transact business in those states in which it is notice filed or qualifies for a corresponding exemption from such requirements. For information about Visionary’s registration status and business operations, please consult the Firm’s Form ADV disclosure documents, the most recent versions of which are available on the SEC’s Investment Adviser Public Disclosure website at www.adviserinfo.sec.gov.

Use of Indices and Benchmark Return Indices cannot be invested in directly. Index performance is reported gross of fees and expenses and assumes the reinvest dividends and capital gains. Past performance does not indicate future performance and there is a possibility of a loss. See disclosure page for indices representing each asset class.

Risk assets extended the October rally into November, continuing to claw back returns from lows earlier in the year. Investor sentiment swung 180 degrees as economic data showed signs of peaking inflation and the resulting potential for a slowing pace of Federal Reserve (“Fed”) rate hikes heading into 2023. Fears of a recession that spooked markets earlier in the year have either moderated or been accepted by investors and, despite economic activity starting to trend down, markets remained resilient. U.S. equity markets generally saw mid-single digit returns, driven by larger cap companies, while small cap stocks, as measured by the Russell 2000 Index, posted a modest positive return. Non-U.S. equities rose in the month and widely outpaced their domestic counterparts. A new prime minister in the U.K. and clarity on reforms, as well as favorable inflation prints in Germany and Spain, likely helped push international developed markets (MSCI EAFE Index) higher. The U.S. dollar weakened compared to many major currencies, providing an additional tailwind for international stocks. Emerging market equities (MSCI EM Index) also saw double digit gains in the month. China remained in the headlines; positive sentiment about the potential for easing restrictions on the zero-COVID policy overshadowed protests later in the month. MSCI China returned 29.7 percent in November.

Fixed-income markets also generated positive returns for the month on the back of lower interest rates. The U.S. 10-year yield fell 42 basis points, ending the month below four percent on the heels of better-than-expected inflation data. However, front-end rates moved higher after the Fed raised its target rate an additional 75 basis points at the November meeting. Securities down the capital stack, e.g., U.S. corporate high yield, also fared well in the risk-on environment. Diversifying and inflation sensitive areas of the market such as REITs and commodities eked out modestly positive returns in November, but both segments saw mixed performance from underlying sectors. Within the commodities market, falling energy prices were more than offset by strength in industrial and precious metals.

The October inflation report marked a turning point in investor sentiment. U.S. CPI grew 7.7 percent year-over-year in October. While still elevated, the print came in below expectations and marks the lowest reading since January. Investors pivoted to the “Fed pause” narrative, sending the S&P 500 Index up 5.6 percent on November 10th, the best day of 2022 thus far, and among the top trading days on record. Expectations for a moderating Federal Reserve soared, with the market shifting to an 85 percent probability of a 50 basis points rate hike in December rather than a 75 basis point hike. Markets are also pricing in a pause in the rate hike campaign in 2023. The Fed remains committed to being in a “higher for longer” mindset, but the statement coming out of the November 2 meeting lends some credence to the possibility of a pause in 2023 as the committee accounts for the “lags with which monetary policy affects economic activity and inflation. 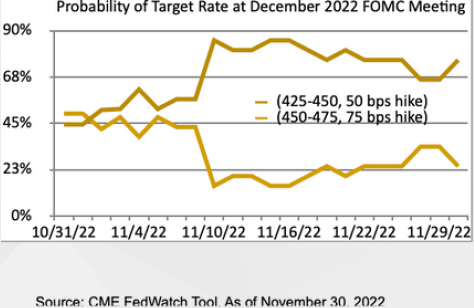 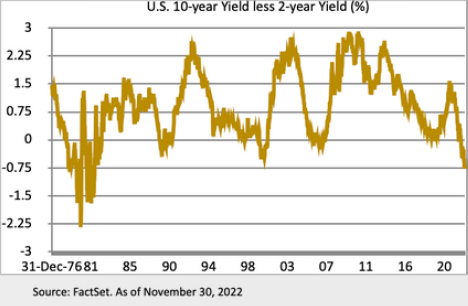 Inflation expectations have moved lower as investors digested the recent CPI report and Fed messaging. This pushed rates on the long end of the U.S. yield curve lower and, based on the difference between the 10-year and 2-year Treasury yields, the curve is now the most inverted it has been since the 1980s (touching -77 basis points during the month). An inverted yield curve has historically been a warning sign of recession to come, and the Fed has made it clear they are willing to sacrifice growth to bring down inflation. We are starting to see signs of slowing activity – PMI numbers moderating, housing data softening, etc. – but the U.S. labor market remains resilient, consumer balance sheets are generally in favorable positions and the BEA reported Q3 2022 GDP growth of 2.9 percent in its second estimate. It remains to be seen if the Fed can navigate a “soft landing” in the new year.

The Federal Reserve and its commitment to fight inflation remains at the forefront of the investment discussion. Recentinflation data is showing signs the worst may be behind us and the possibility of a central bank pause in 2023 has breathed recent life into financial markets. However, risks lurk on the horizon and the chance of recession in the next year is elevated – financial conditions have moved tighter since the beginning of the year, inflation, while slowing, remains very high and geopolitical risks persist around the world. As we head into year-end we are busy finalizing our forthcoming 2023 investment outlook, but we remain steadfast in our view that taking a strategic and disciplined approach to investing allows for the highest probability of achieving long-term investment objectives.

For more information, please contact any of the professionals at Visionary Wealth Advisors.

Comparisons to any indices referenced herein are for illustrative purposes only and are not meant to imply that actual returns or volatility will be similar to the indices. Indices cannot be invested in directly. Unmanaged index returns assume reinvestment of any and all distributions and do not reflect our fees or expenses.

Use of Indices and Benchmark Return Indices cannot be invested in directly. Index performance is reported gross of fees and expenses and assumes the reinvest dividends and capital gains. Past performance does not indicate future performance and there is a possibility of a loss. See disclosure page for indices representing each asset class.