The Great Recession in 2008-09 was extremely painful for many Americans. Its pain was felt by both its depth and its duration – the S&P 500 fell by more than 50% from its October 2007 peak over the next 18 months. It then took another 3 years for the S&P to fully recover in 2012 to its pre-recession peak.

While we’re not out of the woods yet, we are within 5% of the pre-recession market peak. One of the reasons for this swift recovery is the amount and speed of stimulus provided by the Federal Reserve and the federal government. But another key reason for the market turnaround is the U.S. consumer is much healthier today than 2008. 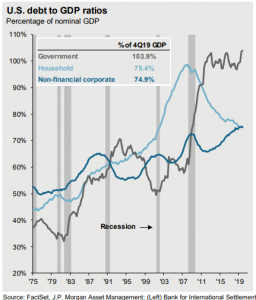 Disclosure: The opinions voiced in this material are for general information only and should not be construed as personalized investment advice, including the recommendation to engage in a particular investment strategy.  The information contained herein has been obtained from sources deemed reliable but is not guaranteed. Rates quoted within are subject to change and, as such, may no longer be accurate. Past performances may not be indicative of future results and may have been impacted by events and economic conditions that will not occur or prevail in the future. No investment strategy can guarantee a profit or protect against a loss in periods of declining values.  Please remember that different types of investments involve varying degrees of risk, and there can be no assurance that the future performance of any specific investment or investment strategy, including those undertaken or recommended by Visionary Wealth Advisors, will be profitable or equal any historical performance level(s).